An Enlightening Visit to Cantillon

Posted on December 21, 2013 by Brother Spargealot 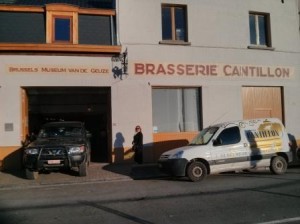 There is nothing wrong with pushing the envelope when it comes to brewing, but Zymurologists appreciate historical beer styles, especially those that were saved from the brink of extinction due to the efforts of those that knew how valuable a resource they were at a time, when even their own local population turned their backs on them. Such was the case with Cantillon which faced bankruptcy and closing its doors as local tastes gravitated towards the ubiquitous light lager in the 1980s.  The United States literally saved the company and now comprises roughly 30% of their sales. While they claim a number of other countries are clamoring for their beer including Japan and China, they are turning away new accounts to remain true to those that supported them in the past. While that is good news for those of us in the US, we have watched as domestic demand outstrips available supply here as well. New Mexico which once received regular shipments now gets nothing and states like Colorado occasionally get small bottles that immediately fly off the shelf. In the US the imports are controlled by Shelton Brothers, so perhaps an email campaign might be in order. 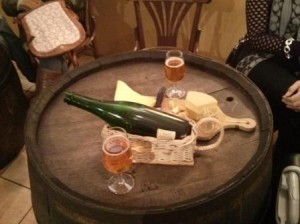 Founded in 1900, Cantillon produces spontaneously fermented limbic beer using methods established before Pasteur “discovered” yeast played a significant role in the brewing process.  Jean-Pierre Van Roy, the current brewmaster, married Claude Cantillon and took over operations. They have a wonderful dog that sometimes shows up at the brewery and loves belly rubs. A self guided and somewhat hazardous tour of the brewery costs Euro 6 and includes two samples of a geueze and a framboise they call Rose de Gambrinus. You can buy several rare bottles to drink onsite but only mainstream offerings are available to go. They no longer allow offsite sales of very rare bottles as some less scrupulous types were selling them at an extreme premium. We were lucky enough to try a 2006 Geueze and also this year’s Zwanze Day edition. The former was fantastic, the latter was a little bitter for my taste. On another note I no longer regret passing on the opportunity to get up at 6am to stand in line for a small sample of it. The brewery itself is located in central Brussels near the Lemmonier subway stop a few blocks walk into a somewhat run down but still seemingly safe part of the city.  Cantillon is open Monday through Friday from 9am until 5pm, although they only brew during the winter months. 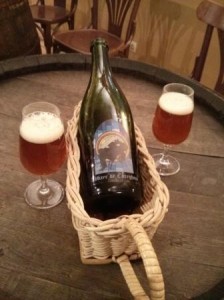 We were very lucky to stop in on a Tuesday while they were brewing, so we were able to watch them clean out the mash tun and then transfer wort into the cool ship. I was also very lucky to be able to talk to Jean-Pierre a little about some specifics regarding the brewing process, something they are very open about.

Cantillon maintains their beers cannot be reproduced and the brewery can never be moved which caps their capacity at 1700 hectoliters (roughly 1,500 bbls) because  their spontaneous method introduces a signature blend of microorganisms only found in their immediate region.  The local university identified 100 yeast strains, 38 lactic bacteria, and 27 acetic bacteria.  If you taste their young geueze brettanomyces definitely stands out as does lactobacillus, but as the beer ages and perhaps oxidizes a little acetic character is also easily identified. So let’s break down the process for those that are interested. 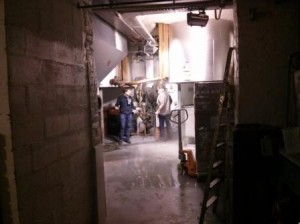 According to Jean-Pierre, Cantillon does not treat its water or add any minerals. The water is simply boiled.  The grist is 35% un-malted wheat and 65% malted barley (I noticed bags of Dingemans).  They use aged hops that have lost aroma and bitterness only for preservative purposes and contract with companies like Hopsteiner who sell them bales of 3 year old oxidized hops (they claim they can use any variety, but I noticed only Halletauer). Their normal batch size is 7,500 litres (roughly 64 barrels), so we can assume they brew about 24 times a year. The 1,300kg of grist is mashed with two steps at 113F and 161.6F for two hours total (I didn’t ask but assume the mash was an hour at each temperature).  They then drain the mash tun and subsequently sparge (assuming around 170F) to get 10,000 liters (around 85 gallons). The runoff flows into two copper boilers for a “three to four hour” boil (although one person there said it was more like two hours). My guess is that they work to reduce down to the 7,500 liters they need and the time to do so can differ. After boiling the wort is transferred into a tub that filters out the loose leaf hops then pumped into the massive copper coolship located in the building’s attic. We witnessed the transfer happening around 3pm. Shutters on either side of the room housing the cool ship are opened or closed to control airflow somewhat in order to bring the temperature down to between 64F and 68F. According to Cantillon the wort is

then inoculated overnight by the multitude of airborne organisms that will spur fermentation.  The next morning, we assume perhaps by 9am or 10am the inoculated wort is drawn into a stainless tank below the coolship within which it is sometimes mixed with macerated fruit or which is simply an intermediate holding vessel (according to Jean-Pierre the wort never stays in it) and quickly thereafter racked into large wooden barrels made of oak or chestnut (and varying in size from 225 to 500 liters).

Cantillon utilizes mainly old wine barrels, although they more recently obtained Cognac barrels.   The barrels are cleaned after every use with sharpened chains that scrape the staves and then steam is used to sterilize the interior’s surface. Finally the barrels are treated with burning sulphur and quickly sealed to prevent any new contamination. Although a lot of emphasis is placed on the overnight inoculation in the cool ship it is highly likely yeast and bacteria in the porous reused barrels contributes significantly to fermentation and flavor development.  It’s also interesting to note that plugging quantities and liquid volumes into recipe formulators results in an estimated original gravity near 1.040 but with final gravity coming in very dry near 1.002, ABV approaches 5% (which is what is listed on their labels). 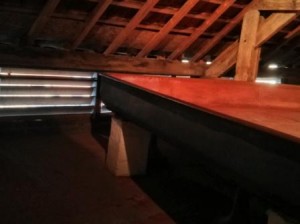 Primary fermentation happens quickly with the barrels bung left open which results in the loss of as much as 10 liters. Although we didn’t see it, other sources claim when fruit is added a mesh is inserted to insure it is not blown out.  In three to four weeks the barrels are sealed and allowed to mature for one to three years. Geueze is composed of a blend of one, two and three year old brews. The younger beer is traditionally used to essentially krausen at bottling time, although Cantillon also produces several beers under the Lou Pepe labels that are primed.   Once barrels are chose for blending beer is pumped into a stainless tank that feeds a somewhat antiquated plate filter that then feeds into two stainless tanks connected to a bottling machine.  Bottles are corked and capped and allowed to mature on their sides. At one time they were only corked, but a heat wave in the 1930s resulted in huge losses.

Cantillon is a beautiful little brewery making very unique beer and I encourage everyone to make a pilgrimage to it if they are anywhere near Brussels.  Keep an open mind and watch your head.

Cloistered with a bubbly personality.
View all posts by Brother Spargealot →
This entry was posted in Beery Happenings Beyond. Bookmark the permalink.