Homebrewing for Simpletons and Those with Little Free Time

Posted on July 3, 2015 by Brother Spargealot

A mantra within homebrewing circles suggests “making beer is easy, but making great beer is difficult”. Not to contradict conventional wisdom, but you can make great beer fairly easily that far surpasses that found at your local bar or liquor store. Let no one including commercial brewers convince you otherwise – YOU CAN MAKE AS GOOD OR BETTER BEER AS ANY COMMERCIAL BREWERY. The same could not be said in the distant past when homebrewers scrounged for cans of imported liquid malt extract that was often well past its prime, or dry yeast packets stored at dubious temperatures. Today we can get the exact ingredients used by professional breweries and brewpubs. The amount of information available to homebrewers also means some people making beer in their homes are now more technically adept than many commercial counterparts. Equally important, advancements in homebrewing equipment and brewing techniques now means some homebrewers can use the exact same scaled down versions of what you might see at many breweries and brewpubs. But then again, homebrewers aren’t as constrained when it comes to the process. They are limited only by their imagination. Making exceedingly small batches of beer allows one to take chances. For the remainder of this diatribe I will assume the reader has some knowledge about homebrewing basics and most steps will be covered in a concise way. Like many others we normally make beer using a somewhat bulky all-grain system, although time and space limitations required a different approach at times which I wanted to share.
Easy 2 gallon all-grain brewing
Equipment:
2 gallon pot
collander
grain bag or small “brew in bag” …bag
sanitizer
thermometer
hydrometer
Preparation: Sanitize everything that will be used after the boil. Buy a one gallon jug of Spring Water (spray or immerse the top in sanitizer) put it into a freezer two hours prior to brewing but check that it doesn’t freeze solid (if so remove and put into fridge). Do not think of adding ice from your fridge to the wort or filtered water from any other source after the boil. Bottled Spring Water should have no contaminants. In the two years using this method we have had no infections (but we did win some medals at competitions including a GABF ProAm)

1. Heat 1 gallon of filtered water or Spring water (along with any water additives like gypsum) to 165F 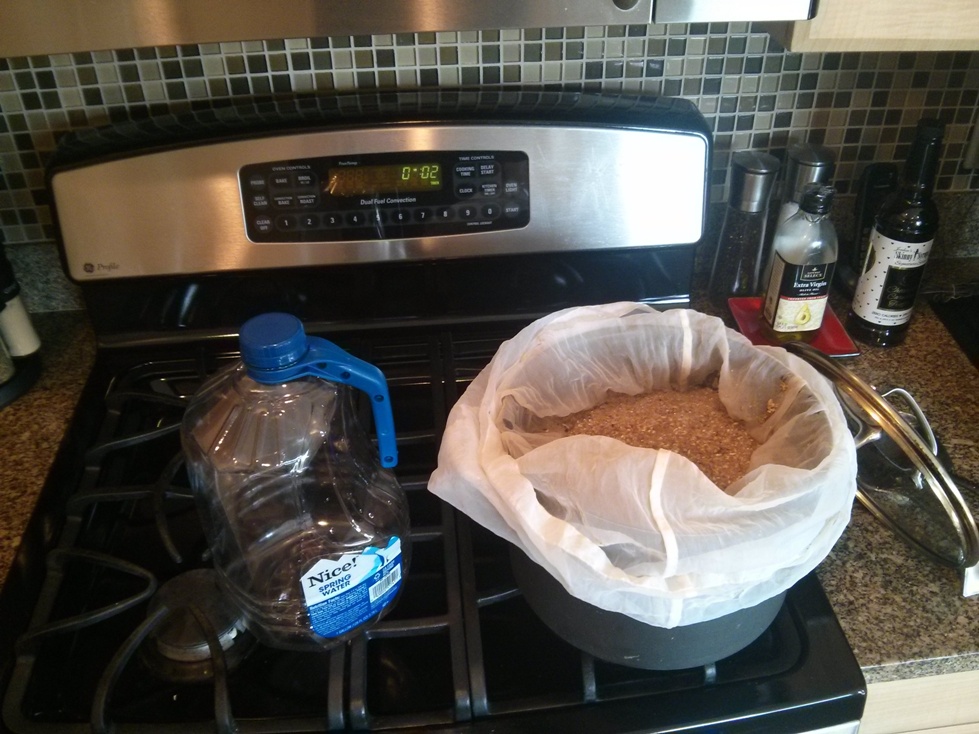 2. Add crushed grain to the grain bag or brew in bag …bag and stir to insure there are no dry clumps, take a temperature reading to make sure it is 152-154F (heat on very low to raise the to that level if needed), then cover and set timer to 60 minutes
3. After 60 minutes heat 1 quart (Beersmith calls for 37 oz) of filtered water in a separate pan or a tea kettle to 170F, uncover the pot containing the grain and slowly raise the bag of grain to insert a colander or large strainer under it and allow the bag to spread out. Slowly pour the heated 170F water across the top of the grain bag making sure to cover the entire surface. 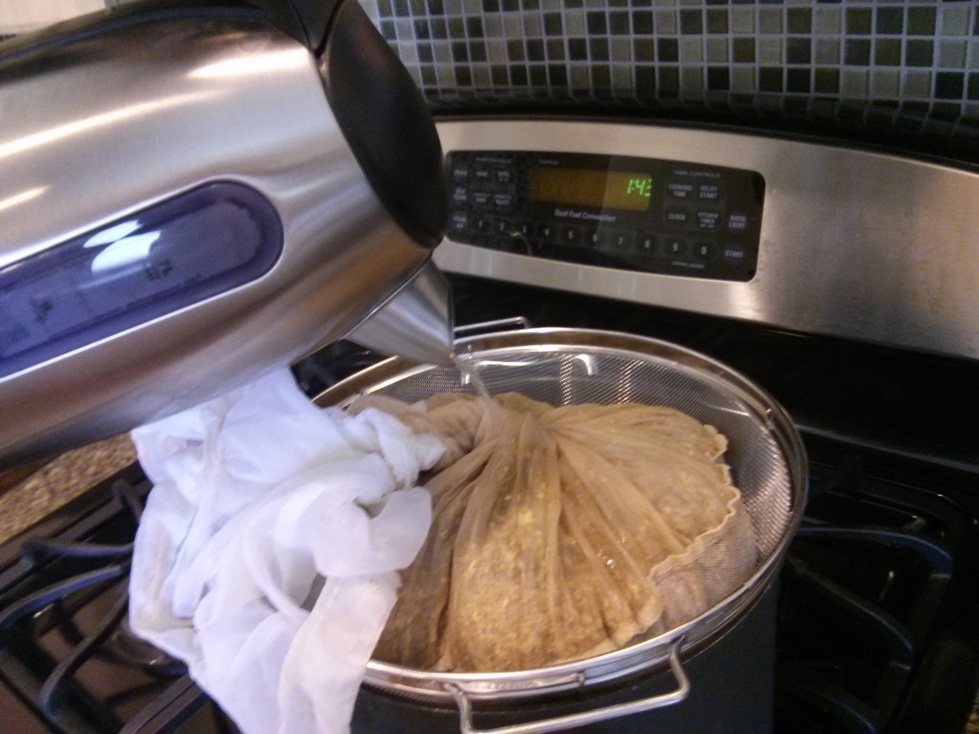 4. At this point you should have just a little more than a gallon of wort (if you want to be sure make a measuring stick or cut a mark in spoon to denote a gallon). Raise the temperature to a boil and watch carefully for boil-overs until a low roiling boil is achieved and start your hop additions. 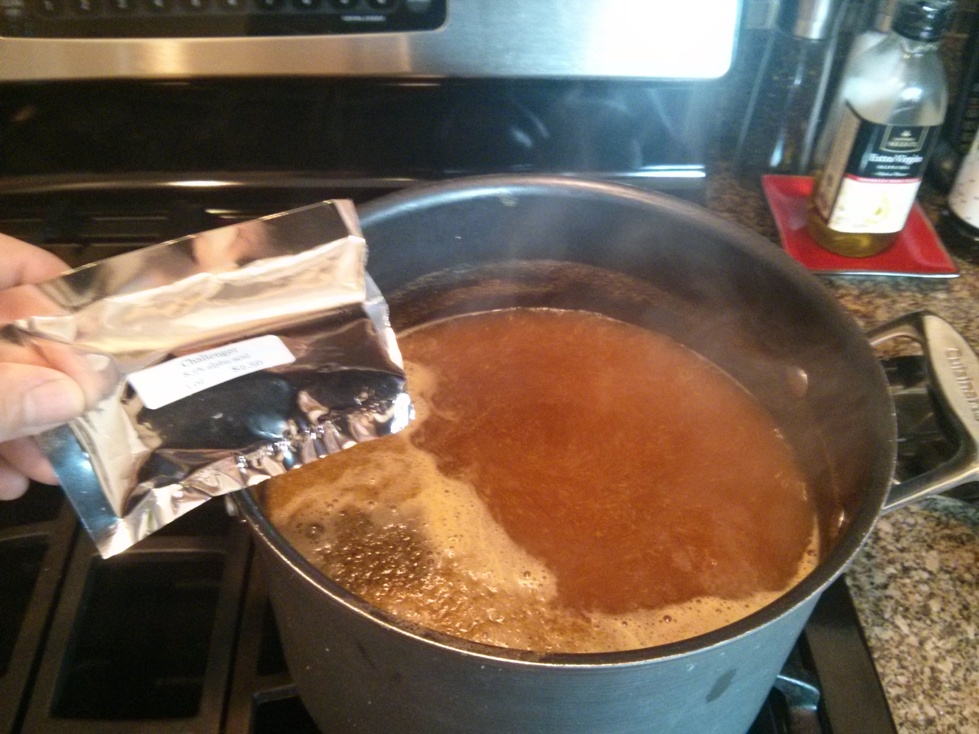 5. At the end of an hour check to make sure the volume of wort has not dipped significantly below the 1 gallon mark (add filtered water if it has). If you want to do so take a gravity reading with your hydrometer with a 50% solution of cooled wort and 50% filtered water. 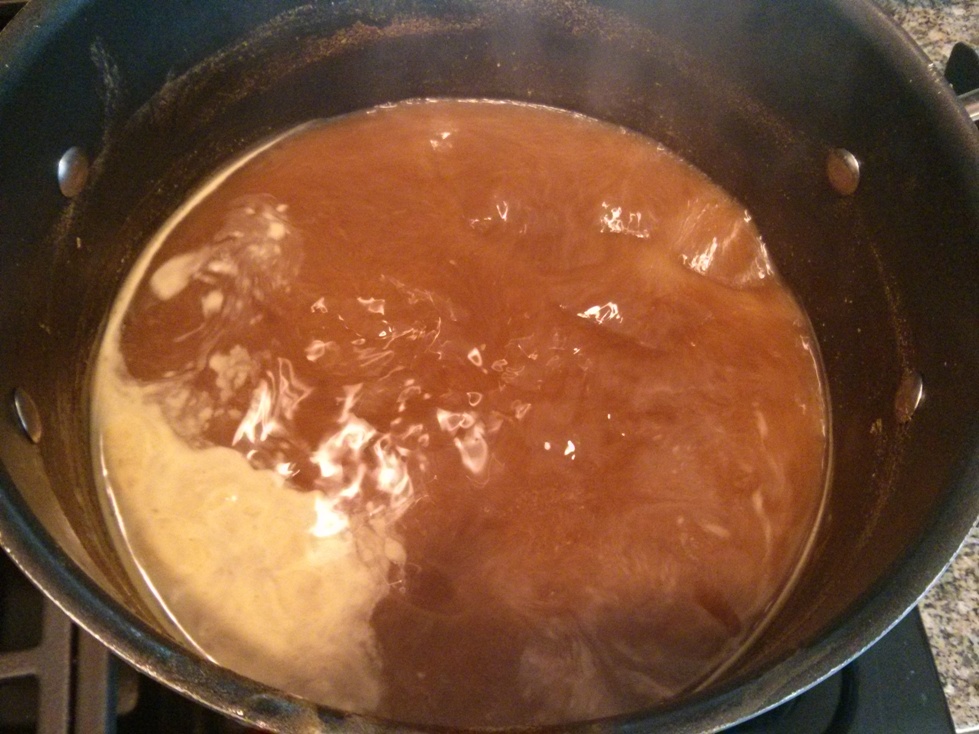 6. Partially fill a sink with water and ice. Stir the wort one last time and add roughly 2/3rds of the chilled 1 gallon jug of spring water to the wort. Immediately cover and set the into the ice bath.
7. Put the sealed 1/3 gal of spring water back in the freezer to keep it cold. Allow the wort 5 to 10 minutes to cool and for the trub to settle.
8. Add the remaining chilled springwater (2/3 gal) into your fermenter. Transfer wort into fermenter using a sterilized siphon (a thermometer strip on your fermenter is useful to insure your wort is now below 72F). In most instances using this method wort will be below 70F within 10 minutes of finishing your boil and hence ready for pitching yeast. 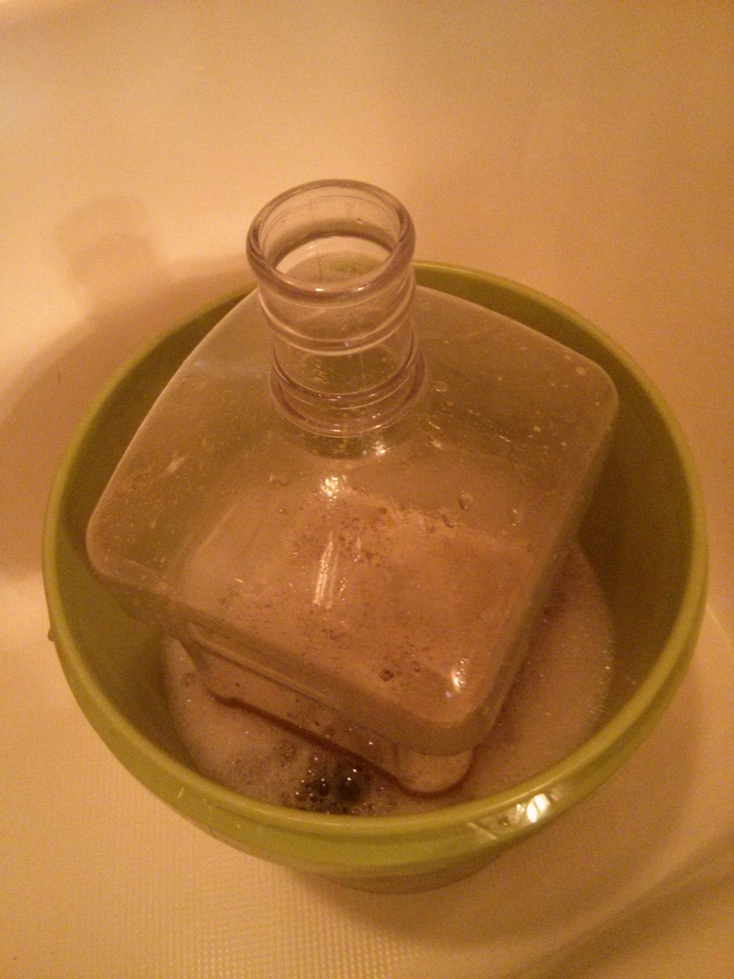 9. Add yeast (no need for a starter in most cases given the small volume). Many people utilize fermentation chambers and some homebrewers have chilling systems (including glycol re-circulation like the big boys), but if you have a room that is normally around 70-72F the temperature can be lowered a few degrees by putting the fermenter in standing water (to get down another couple degrees direct a small fan at it). In this case the two methods lowered the temperature in the fermenter from roughly 70F to 66F.
10. Once fermentation is complete bottle or keg.
Again, experiment and try your own shortcuts. This is a quick, easy and rather foolproof method for making small all-grain batches with limited space. Total time from start to finish was less than 3 hours.