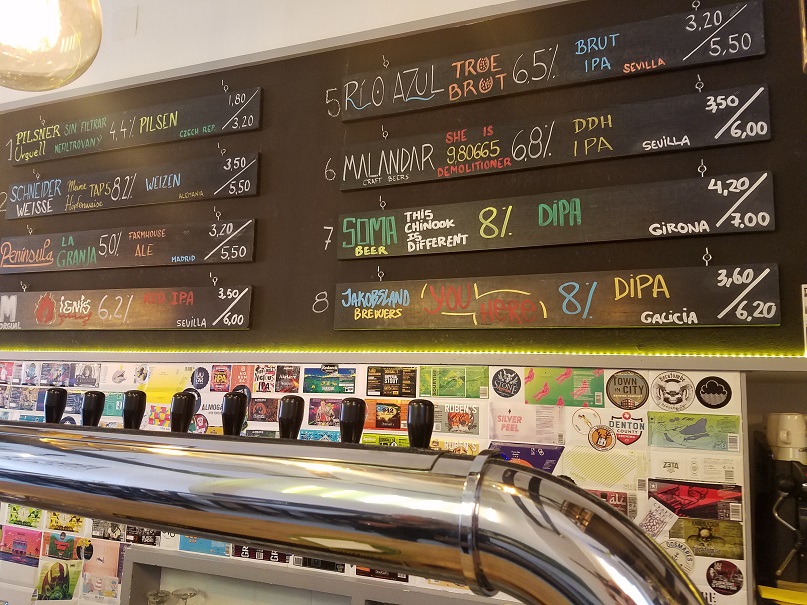 Taplist at Hops and Dreams

Not long ago it was difficult to find anything but the ubiquitous local pilsner Cruzcampo in Seville. If you were lucky you might stumble upon a bar that bucked the local trend and carried Grenada’s Alhambra pilsner (my personal favorite among the lagers of Spain). However, while it is very true that craft beer selection diminishes as you head South on the Iberian peninsula, the region as a whole is quickly adding new breweries and beer bars that cater to both tourists and a local population of mostly young people that are clamoring for a wider variety of beers. Don’t get me wrong Cruzcampo is actually much better than any American light lager, malty with a pronounced hop bitterness and $1 to $1.50 a caña (roughly 10oz) its fine with tapas at El Rinconcillo. Also don’t forget Southern Spain is home to fantastic wines including riojas and Jerez (sherry) along with other fortified wines such as Manzanilla and Vermouth, which are dirt cheap when compared to the Americas or the rest of Europe. However, if you are searching for craft beer I have a few recommendations. Most of the quality establishments are located on the North side of town within easy walking distance from each other with a few scattered but within walking distance.

In the Alameda de Hercules area – 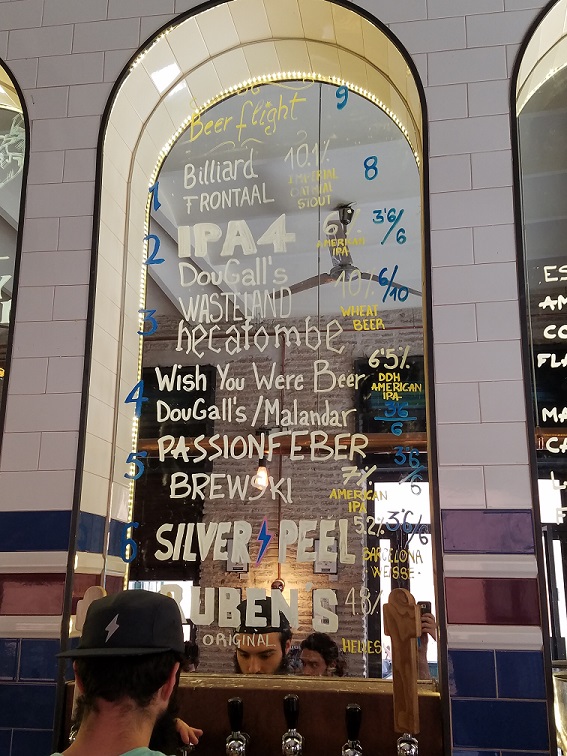 Bierkraft – A very relaxed corner bar that is dog friendly inside and out with a very well maintained tap list and several coolers of quality cans and bottles including everything from Cantillon to Cloudwater, Garage, etc. It is also one of the places that stay open in the afternoons and closes late.

Gigante Bar – This one is on the Alameda, which is a wide pedestrian area that gets crazy at night. They have a good bottle selection and a large patio area.

Maquila Bar – The town’s only brewpub which normally has three or four of their own beers on as well as several guest taps. Their food menu is very good as well. Be aware that they close during the afternoons as do many bars and restaurants. There is a single cooler with bottles and cans but no list so you have to look. 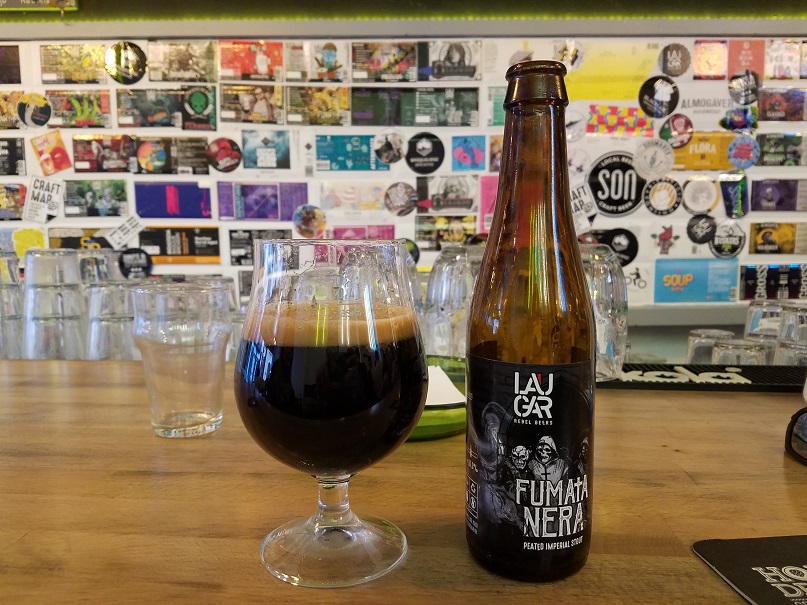 Hops and Dreams – This was my feel-good place in Seville. Perhaps it was the half liters of unfiltered Pilsner Urquel for $4 or the various Garage beers they rotated through, or maybe it was the fact they stocked a number of great local Spanish imperial stouts in bottles. Ultimately it was that and the people who were extremely nice and informative, especially the owner Nasho. It’s a great place the local beer people stop in. While there I was fortunate to meet two local craft brewers.

In the Encarnacion area (just South) –

Viriato (aka Guevara & Lynch) – A decent tap wall with a few boring options as well as four or five more interesting options along with a well stocked beer fridge with options that are once again not on any lists. Nice atmosphere and centrally located with a varied food menu as well.

El Gallo Rojo – Walk out from Viriato and turn left and you are there, it is attached. From what I can tell it’s a co-operative workspace with a bar. Comfortable but rudimentary surroundings, no bottles at all (they are working on getting a fridge), but some good draft choices. Just be aware for the entire month we were there they never changed what was listed on their chalk drawn board and had to recite every beer they had on tap (maybe their wielder of chalk was on vacation all month).

La Jeronima – A bookstore, coffee shop and bar with a few good selections on draft and a small bottle selection with a very laid back Bohemian feel.

La Linterna Ciega – On a main pedestrian artery that leads towards the tourist area you will find this little gem tucked away with a few tables outside and a decent sized interior with a good tap selection and a small bottle fridge.

Further South and Near the Cathedral –

Cerveceria Internacional – Good draft list but it includes a lot of mainstream options most jaded beer snobs might find boring and the same goes for the bottle list, although within each you can probably find something you haven’t had. The place itself is great if you like old beer memorabilia. From what I gather this was the first beer bar in the city.

Lartesana – In the Sta. Catalina area. Neighborhood bar frequented mainly by locals with 6 good taps (okay one was Estrella) and a fair number of bottles. The kind of semi-dive like place I like.

Very far out (as in get a taxi or Uber) – Rio Azul is the only brewery in town with a taproom (at the moment). It would be a very long walk from downtown, but it’s a short drive. The beers were mostly IPAs and while none were infected or flawed in a  big way we agreed all could use work. I hate to say it but the journey wasn’t worth it. In the future look for Hecatombe to open a tap room. In my opinion they made the best well rounded craft beer in the region and are the ones to watch. Otherwise you will find lots of beers from the North of Spain including Garage and Laugar that are world class. 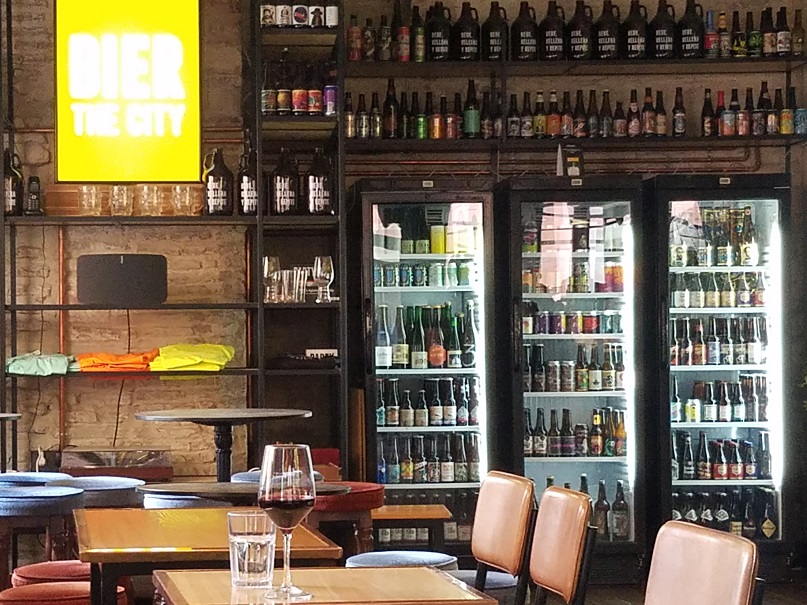