The Stylebusters guide to Köln and it’s iconic Kölsch

Posted on September 21, 2021 by Brother Spargealot 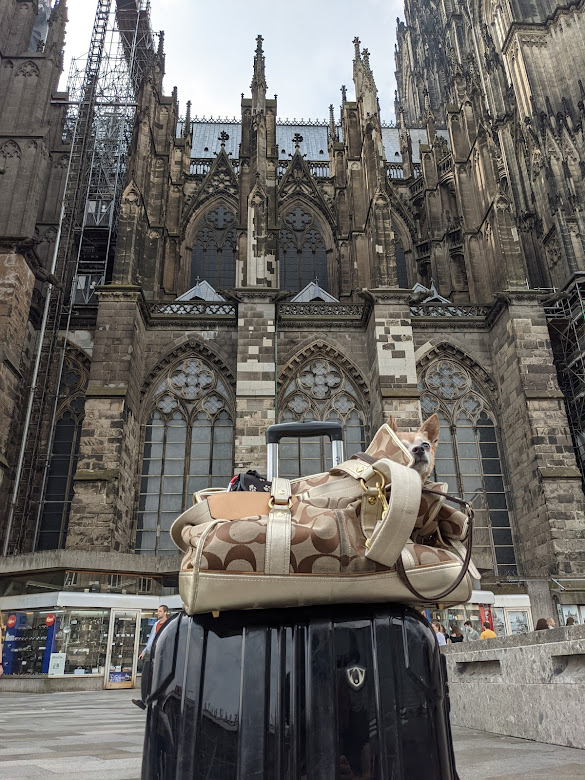 Let’s be honest…at this point I am documenting our travels and experiences because at some point I probably won’t remember much about anything. Köln (or Cologne for us ‘Mericans) is a beautiful and tourist laden city on the Rhine known for, among many other things, having the tallest cathedral on the planet. It is also the birthplace of a particular style of hoppy, refined and normally very clear top fermented beer (ale) that bucks the trend in a country teeming with lagers. Technically the only Kölsch made anywhere on the planet has to be made within 50km of the city and according to specific brewing practices outlined in the Kölsch Konvention as defined by the members of the Cologne Brewery Association (Kölner Brauerei-Verband). In practice breweries all over the world make their own version of the beer and still call it Kölsch. What was interesting to me however is that many of the Kölsch I have had in countries outside of Germany haven’t varied much. They were all extremely pale, very lightly hopped and with moderate fruity esters from yeast strains that seem fairly standard. In Köln the beers sampled varied significantly in color, malt character, yeast signature, degree of attenuation and even hop bitterness. Some had mineral attributes possibly from the water supply or additions, others had some minor sulphur notes to remind you about the lagering process. All were unique and different, something I cant really say about many I’ve had in the US. If you go you might consider reading up on the etiquette and try to learn a few German phrases, the effort will pay off.

So on to the tour and my notes: 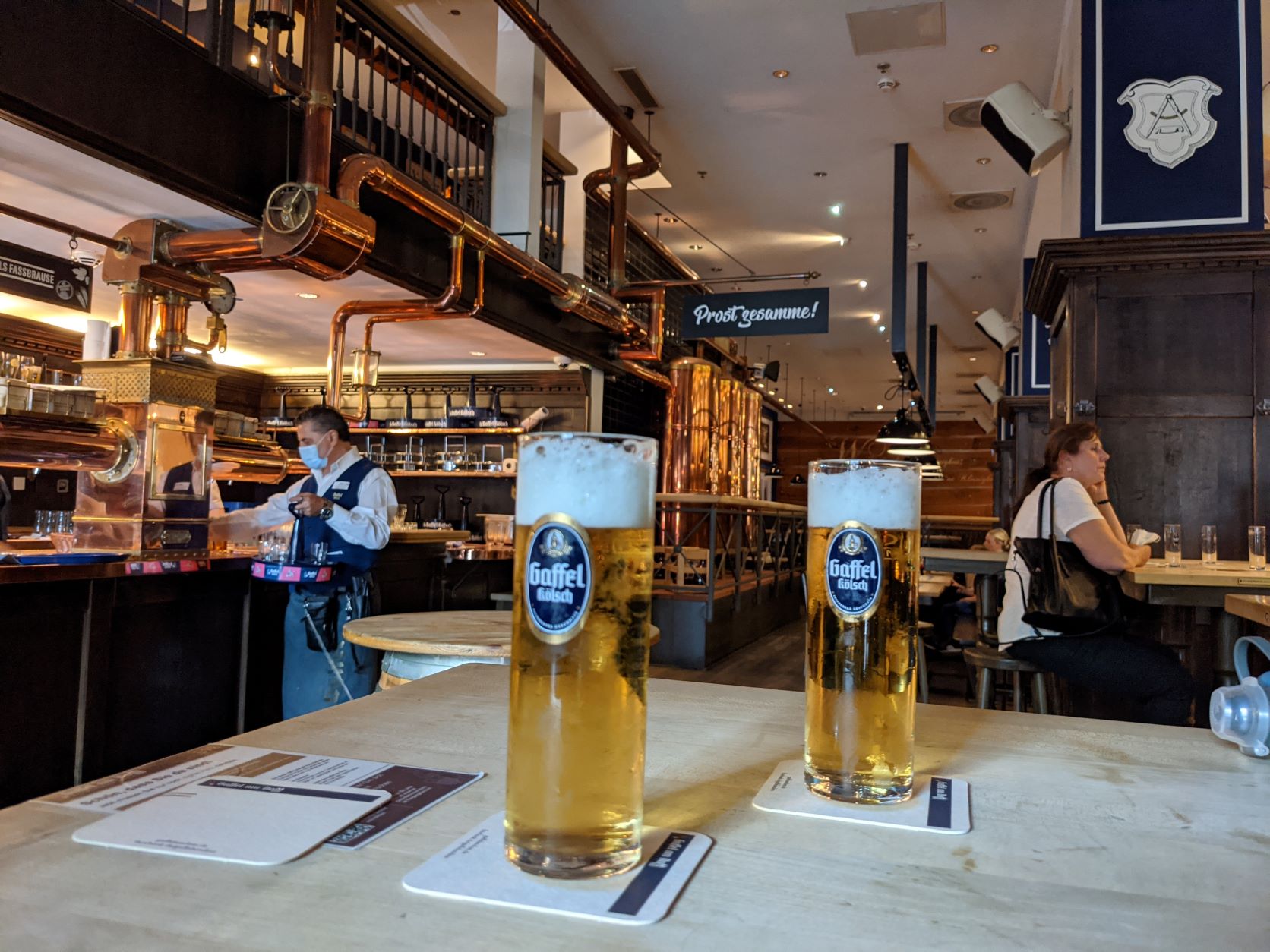 Gaffel am Dom where it was served is newish and touristy, but the waiter was surprisingly nice. Our first stop and in the tourist center near the Rhine. The beer was bright, light straw with a very low SRM. Taste was slightly bitter, effervescent, moderate but perceptible floral esters, and exceedingly easy to drink. Residual bitterness lingered in aftertaste, but not in a bad way. Also perceived a little graininess later but again it wasn’t distracting.  Price for the quickly replaced 20cl was Euro 2. 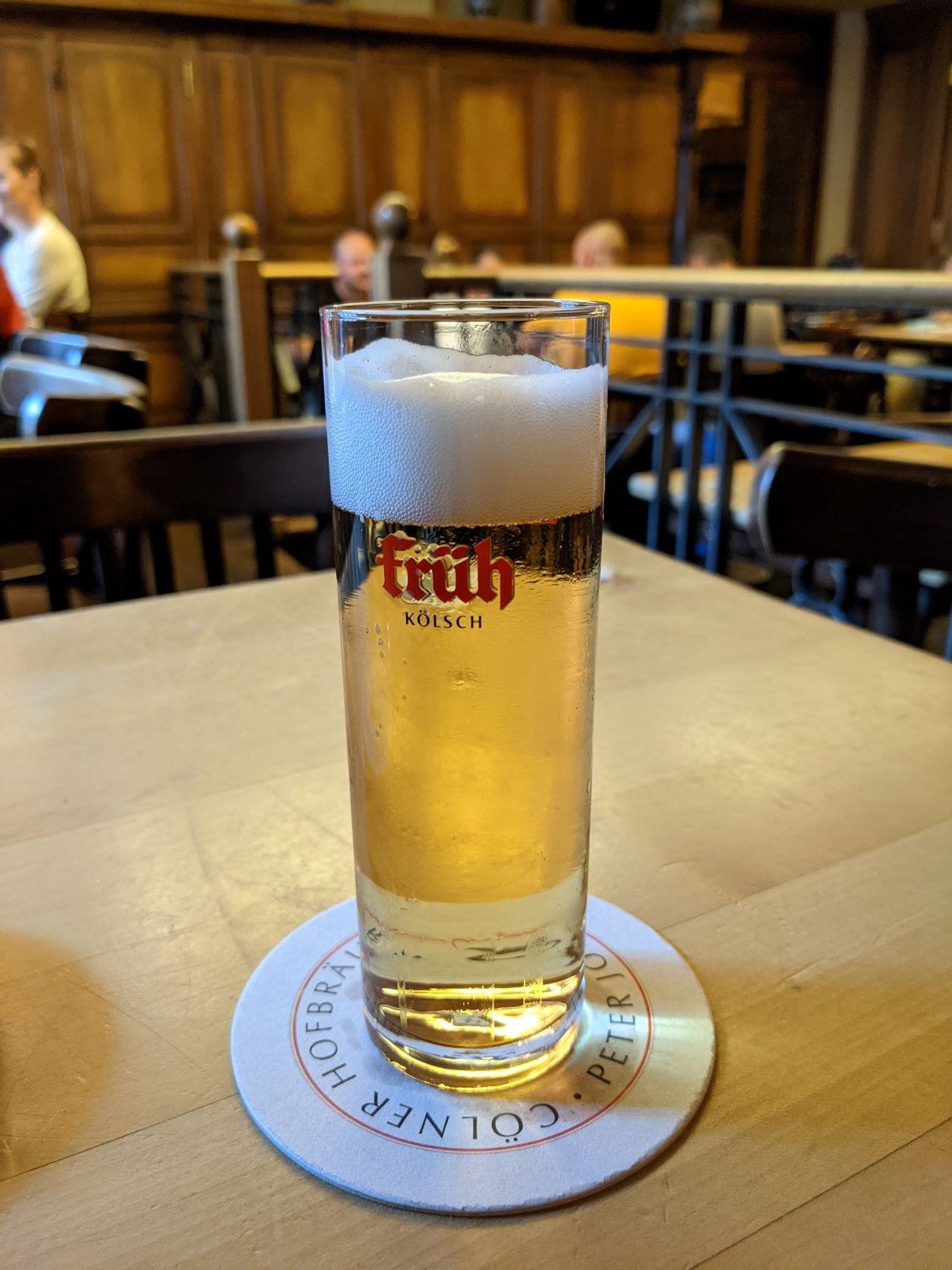 Tourist heavy, extensive number of rooms, nice ambiance. Service was fine until we put our coasters on the glasses, then it was a good 30 minutes and no eye contact, so I had to get in front of him to ask for the bill. The beer was significantly less bitter, SRM was possibly lighter, very effervescent, but subjectively it lacked much character and was perhaps my least favorite of all the ones we sampled. 20cl for Euro 1.90. 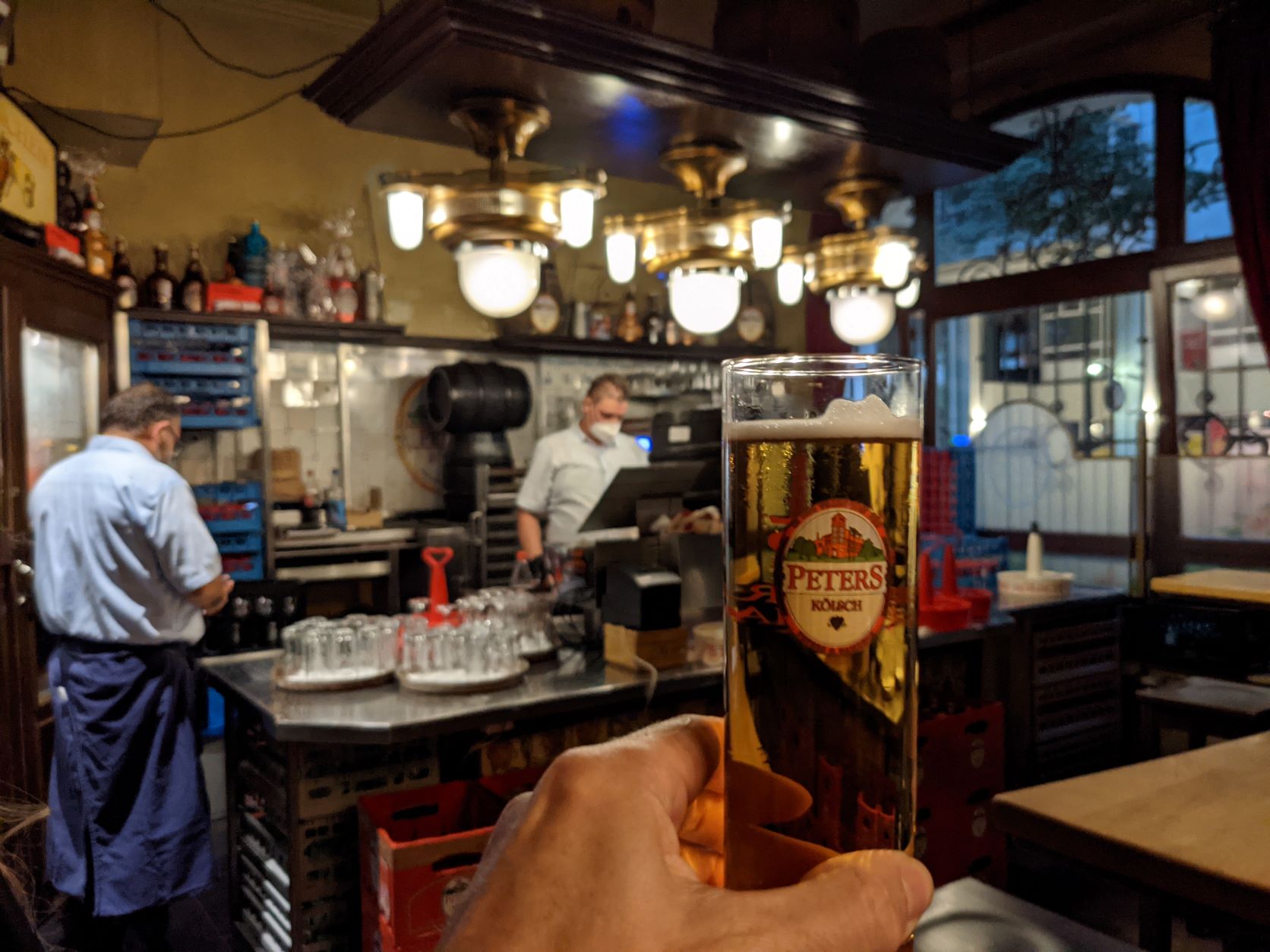 Nicest and most “authentic” look and feel of any of the places we visited in the tourist zone. Beer was floral, but also malty. The body was a little heavy (almost flabby) compared to the last two. It still had some bitterness to balance but definitely a heavier expression. 20cl was I think Euro 2.15 – I lost track and almost no one takes credit cards in Germany. 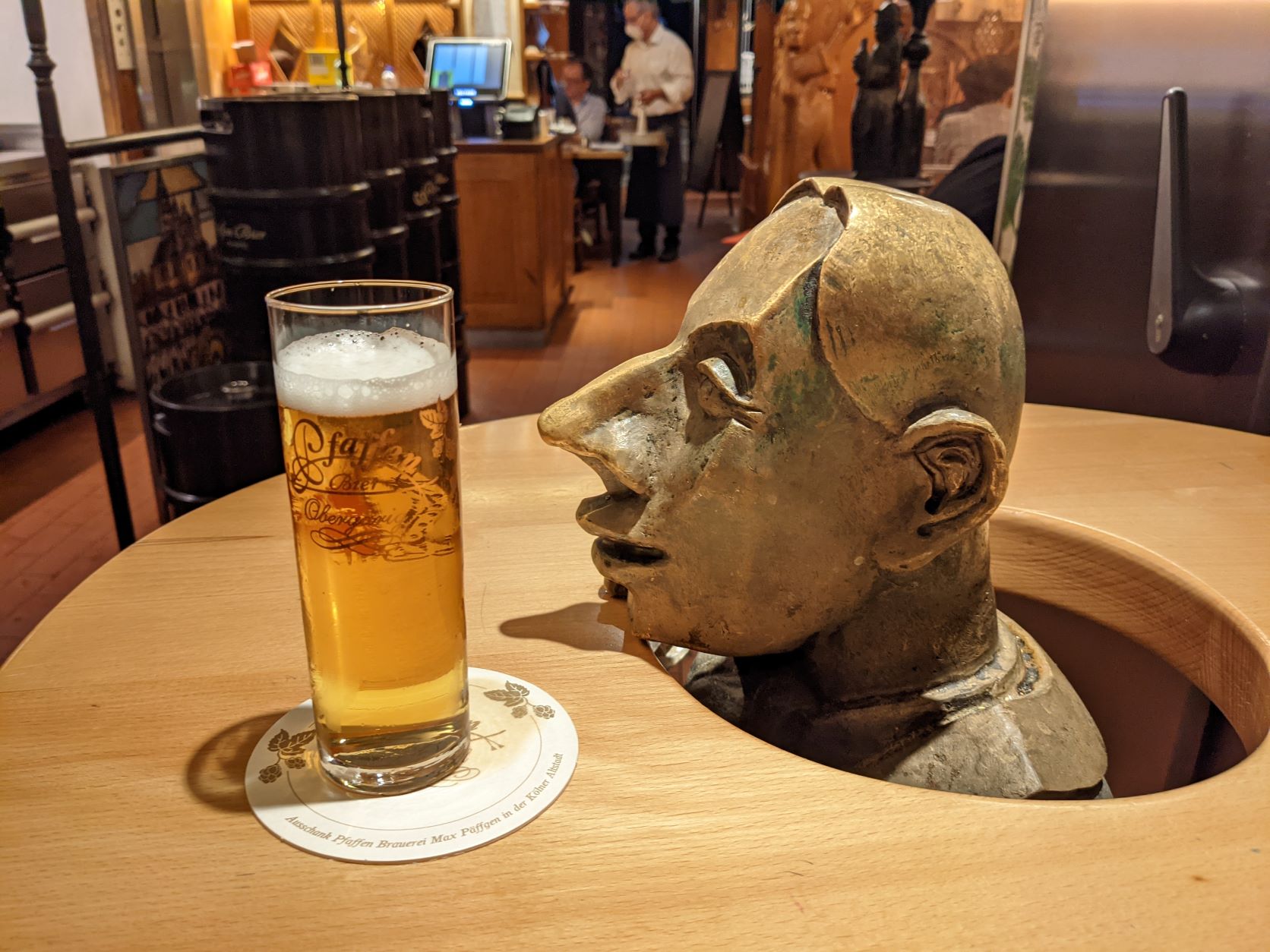 Nice place to escape the crowds on some days. Very cute and cozy little place with carved wood paneling and weird statue tables. The beer was more lager-like than the others, definitely not malt forward. Some sulphur on the nose which purists might knock but I enjoyed. It seemed very sessionable. Subjectively it tied for first with Gaffel. 20cl for Euro 2…I think. 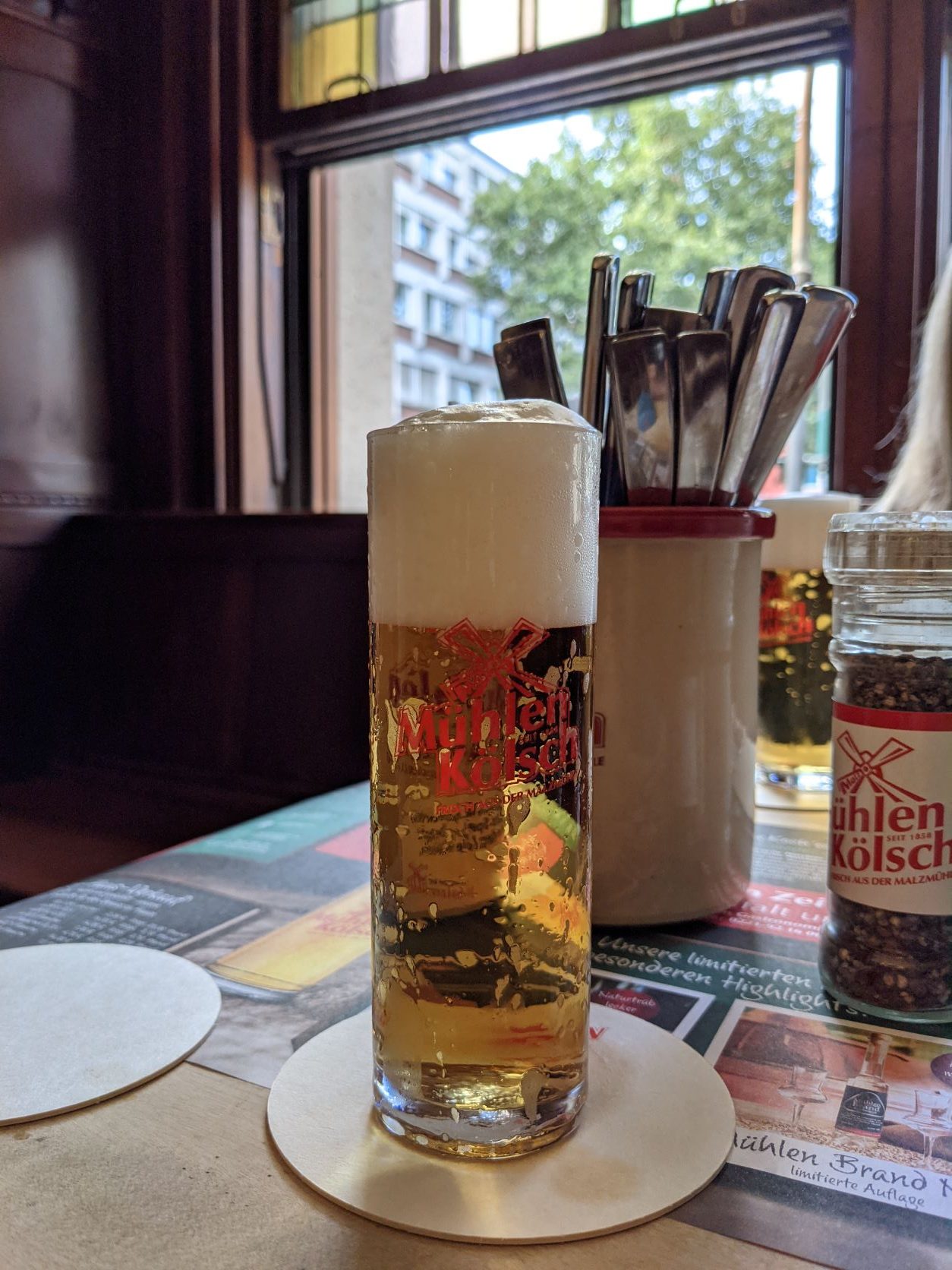 It’s somewhat confusing but if you see the Malzmühl brewery hotel that’s the place. Nice place with a homey environment, stained glass windows depicting local churches etc, sufficiently far away from the tourists. The Malz Mühlen is malty, less bitter at first but more so when it warms, somewhat spicy hops nose borders on very faint phenols, not off putting but in aroma perhaps it could be for some people.  Subjectively nice and balanced but not a favorite. 20cl for Euro 1.90. 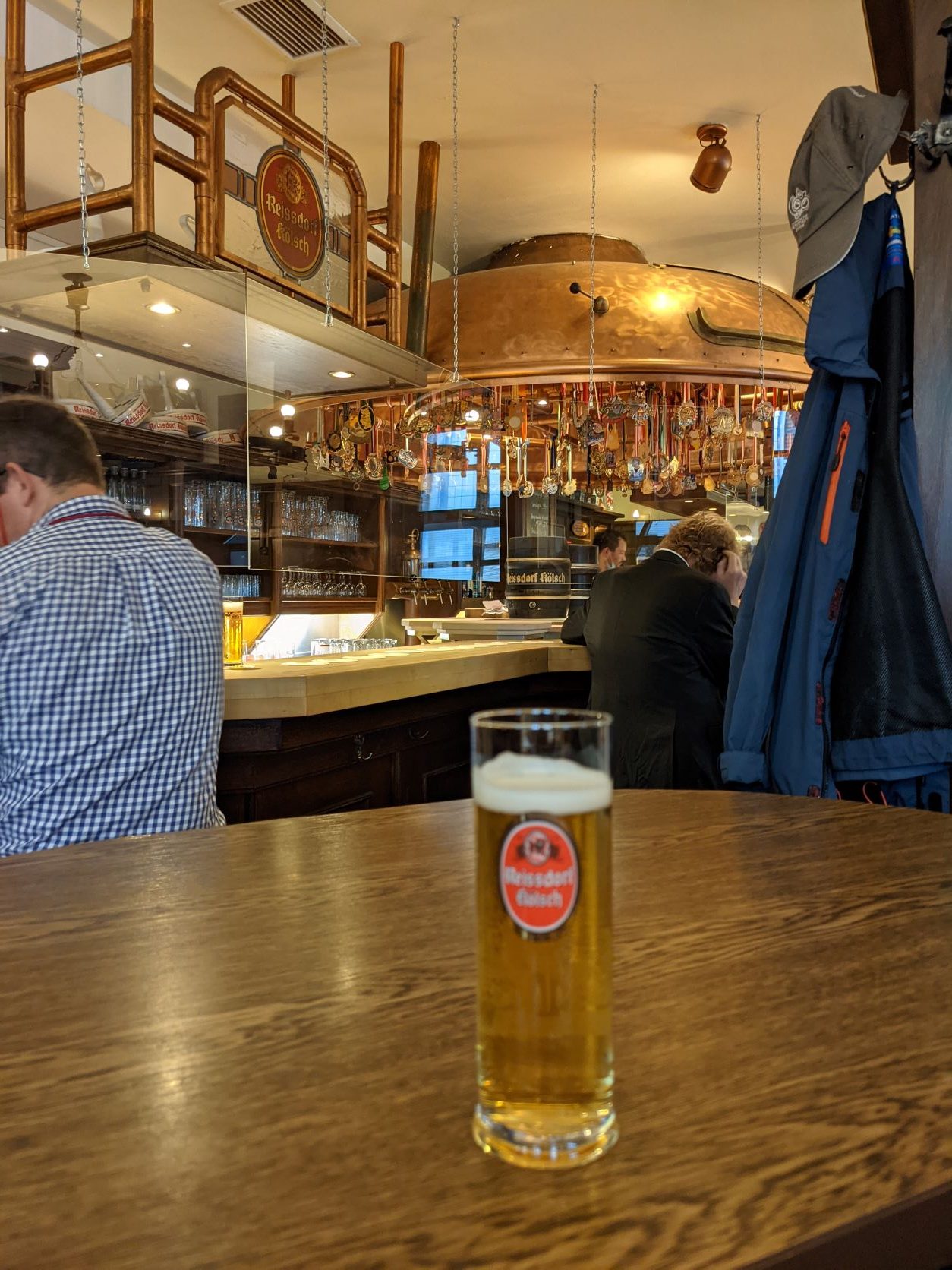 Nice place but it’s a fairly long walk from the Rhine and the tourists (thankfully). The beer was fresh, balanced, fuller bodied and malt forward. There was moderate hop derived character perceived on the nose. Definitely among the top samples we had. 20cl for Euro 1.70.

Tasted on a ship in the Rhine – it’s made elsewhere. It was minerally, with fewer esters than other examples. Seemingly clean but not a standout subjectively. 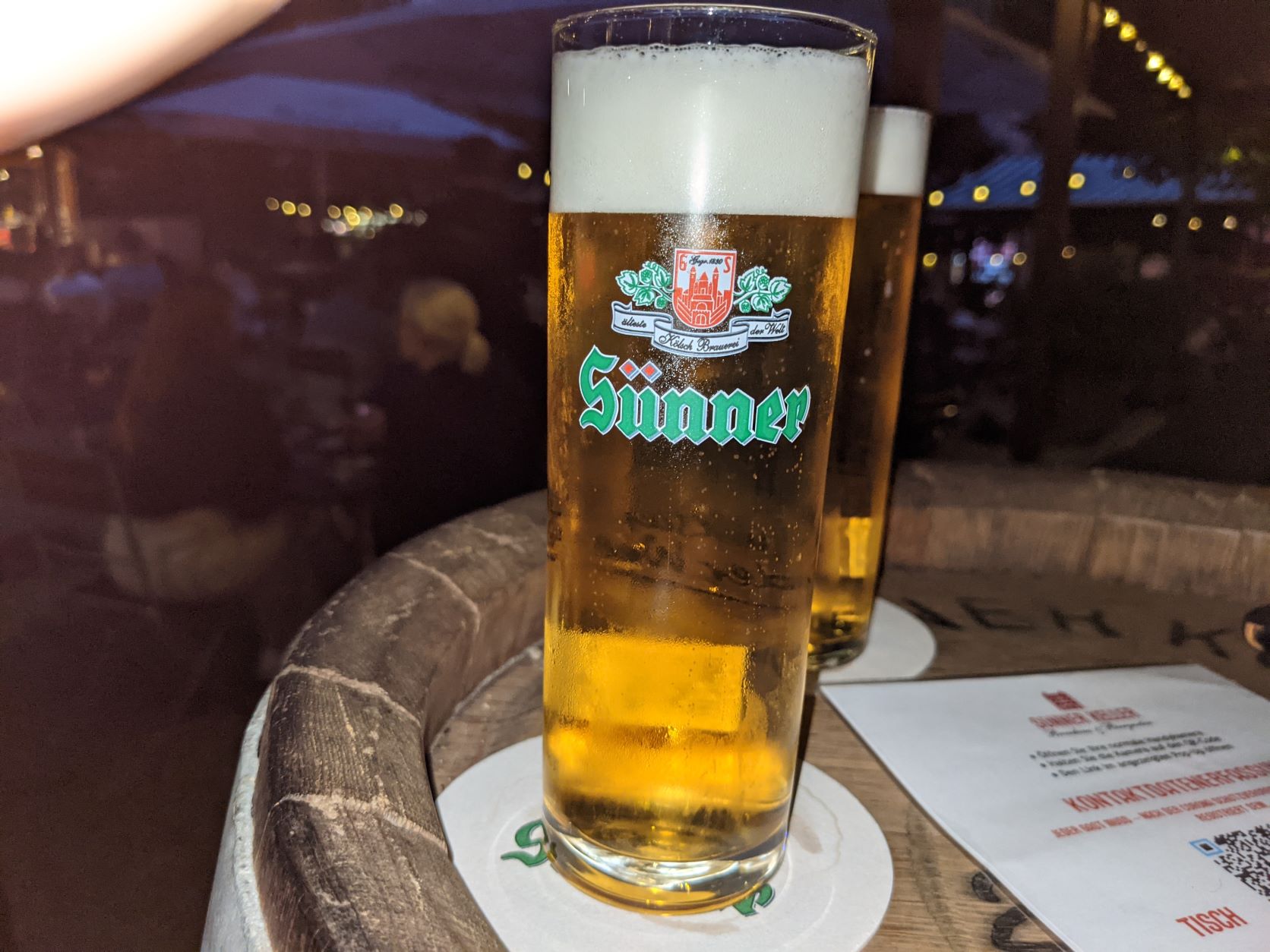 The rather large brewery and keller is a long hike from the center but you can take the tram. The beer was brilliantly clear with somewhat more pronounced esters that seemed very floral. Also a minerally lager like character that was nice. A little heavier in body than some examples but the effervescence and carbonic acid compensated. Served in 30cl in the biergarten and both 20cl for Euro 1.70 and 30cl for Euro 2.60 in the Keller. They also had a nice bock that was Euro 1 for 20cl.

OK, that’s it. Maybe someone other than myself will read this one day, but honestly I don’t really care. At least I now know that what we think is a style in the US is once again pure fantasy. Prost!

Cloistered with a bubbly personality.
View all posts by Brother Spargealot →
This entry was posted in Beery Happenings Beyond. Bookmark the permalink.